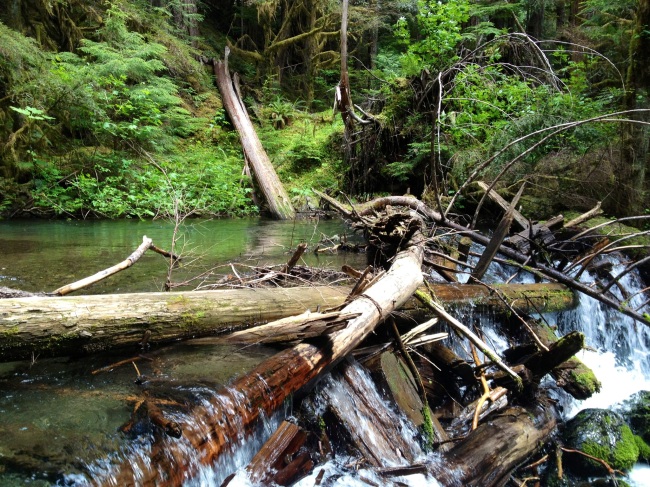 Facing a black bear in the middle of the forest never plays out like you think it will.  It is a lot like life that way.  I mean you can prepare and plan and make lists but the reality is it rarely ever happens the way you planned.

We were stomping along the trail, the familiar rhythm that develops when you’ve been hiking for almost 4 hours and you’re almost back to the car.  It’s when your legs are on auto-pilot, when you have to pee but you’re going to hold it because you’re almost to the privy at the trailhead.  This is the part of the hike when you start to allow your brain to wander to what you really want to eat right now.

Your trail mix and granola bar suddenly seem like the boring date you’ve put up with, but certainly don’t want to spend any more time with.

So yesterday, while hiking with K and her dog—only 10 minutes from ending a gorgeous hike in the Olympic National Forest—I glanced uphill in the forest about 50 feet away and thought I saw something…a black blob behind a tree.

I know, you want it to be more glamorous than that.  You want to me regale you with something Hollywood, but it wasn’t like that.

Then I thought I saw the blob move.

“K…stop walking.”  I immediately said again.  This time, my tone was more I mean it.

She came over next to me, put her hand on my shoulder and said, “We need to look BIG.”  Yes, big is scary.  Let’s look big.

Then I’m almost positive K stood next to me, BUT a little behind me.  As if to say to Bear, “We’re both here, but if you have to chose, take her first.”

Being the experienced backpack trip leader I was suddenly the bear guru.

“We need to make noise to make him go away, let him know we are here.”

Then K started singing “Jingle Bells” at the top of her lungs.

That got his attention.   He looked at us.

I yelled out at him. “Go away bear!  Get out of here.  Move along!  Nothing to see here.”  Stuff like that.

He didn’t move much.

K switched it up in her No No Bear Medley to “Oh Susanna!  Oh don’t you cry for me!”

I whacked my trekking poles together to make more noise and waved them in the air to make us seem big.  Big, with long pokey weapons.

He stood still, looking down at us for a minute—time moves slowly in these situations—and eventually moved a little up the hill and stopped.

“What should we do?” K asked before starting her next song.

“Let’s keep going since we know where he is and we can keep making noise.”  I said.

So we got out of there.  Mountain bikers who showed up about 5 minutes after us at the car said the bear had come back down to the trail…probably only minutes after we were gone.

Here is what I learned when faced with a bear.  This is by no means meant to be an authoritative guide.  Just one dufus hiker to another.  Hopefully the lesson will apply to your life as well.

You are braver than you think.

By Common Consent, a Mormon Blog

The greatest Mormon blog in the universe.

It's just my point of view. Love it or hate it.

18+ A Blog about MY life, my journey to self acceptance & discovering my self worth, I really don't give a flying squirrel fart what others think

The numpty with a camera

Adventure Is All You Need

Notes from the field, essays, and observations.

nature has no boss

"There is no such uncertainty as a sure thing.” ― Robert Burns

Camera One closes in - The soundtrack starts - The scene begins - You're playing you now...

Exploring the World with a Camera

thoughts from the forest

"Ideologies separate us. Dreams and anguish bring us together. " E Ionesco